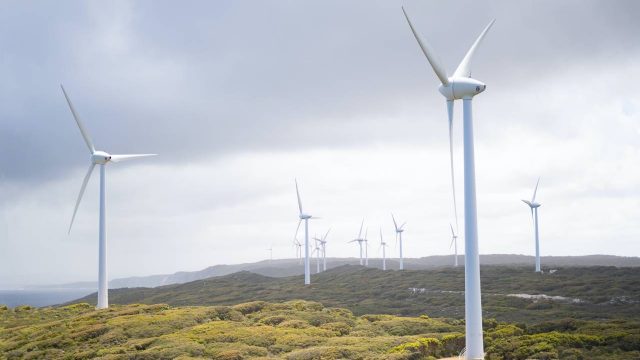 The Turitea wind farm will be the largest wind farm in New Zealand once completed. Located in the Tararua Ranges near Palmerston North, the wind farm sets out to avoid 818,000 tonnes of CO2 each year if the electricity from the site were to be generated from a coal-fired plant. It would avoid 382,000 tonnes of CO2 from gas fired generation.

The electricity generated from the site will power 118,000 New Zealand homes annually, or 370,000 electric vehicles, and is considered in the top 5% of wind farm sites globally. This contributes to a whopping 2% of New Zealand’s renewable annual generation!

This modern site was consented for in the early 2010’s, however with the upgrade in wind turbine and farm technology, the site will have more recent models installed – increasing the amount of electricity that can be generated from the site.

We loved working with the recent Turitea wind farm build and are proud to have contributed to New Zealand’s global narrative of being a clean, green energy supplying country. 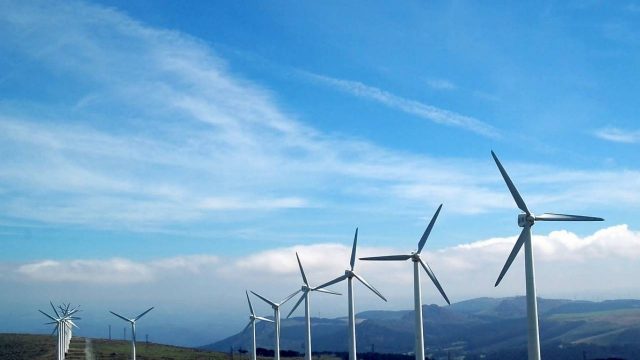 19km of access tracks were developed within the site to ensure that the turbines and cabling could be developed, with approximately 800,000m3 of earthworks needing to be done. 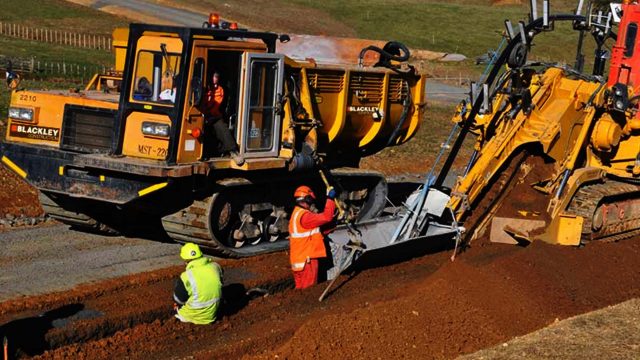 The project at Te Uku Wind farm was a massive one, and it has just celebrated its 10-year anniversary in July this year.

We trenched and cabled 22,935 metres of 2 fibre optic cables. The job was no easy project – with the hill country terrain being expectingly steep.

While working away on the site, the wind farm had also faced severe rainstorms making the overall project more challenging than expected. Moreover, the terrain would occasionally consist of volcanic boulders the size of cars!

We love a good challenge.

On top of the trenching and cabling, we also installed 230 water stops, 4,000m of 100mm subsoil drain, 28 transformer bases and turbine entries, as well as the completion of 300 density tests.

Overall, we were happy to see the project working well over the past decade – and would love to tackle the steep slopes in the future. 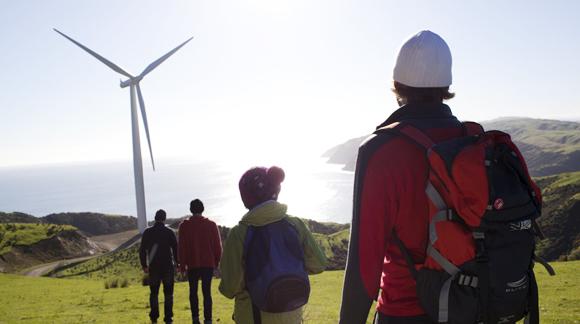 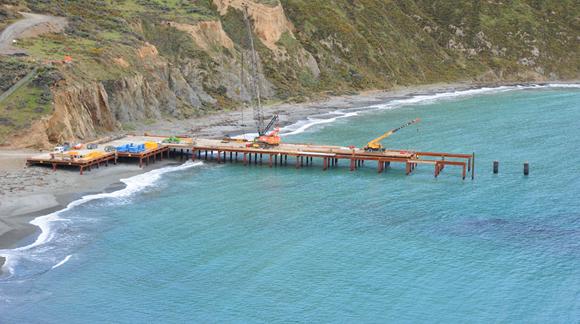 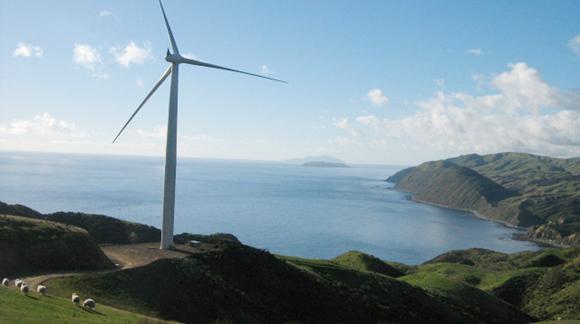 The project generates a significant amount of electricity, powering approximately 73,000 New Zealand homes annually. This electricity generation could power the homes of Wellington City, Porirua, and the Lower Hutt region.

The wind farm is strategically positioned to catch the funnelling effect of the Cook Strait, providing strong, consistent wind speeds. This makes it one of the best performing wind farms across not only New Zealand, but also the globe.

In fact, the wind farm performed so well, that when an electrical issue with a Wellington substation occurred in 2009, the wind farm’s generation was enough to keep the lights on until the substation was fixed.

The site proved difficult to navigate, as you can expect, the roads were narrow and winding. Not only that but public transport would also have proved to be an issue to navigate around. Therefore, turbines were shipped from Picton and delivered to the Cook Strait, and from there transported to the wind farm site. 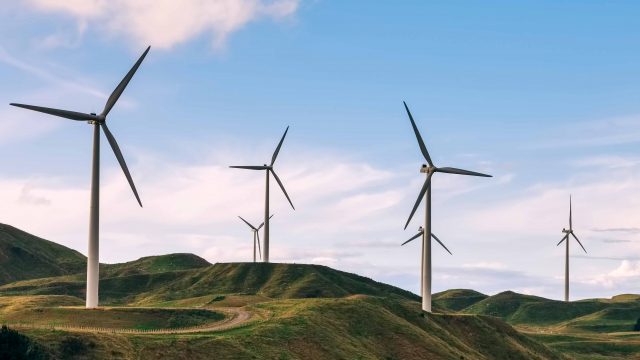 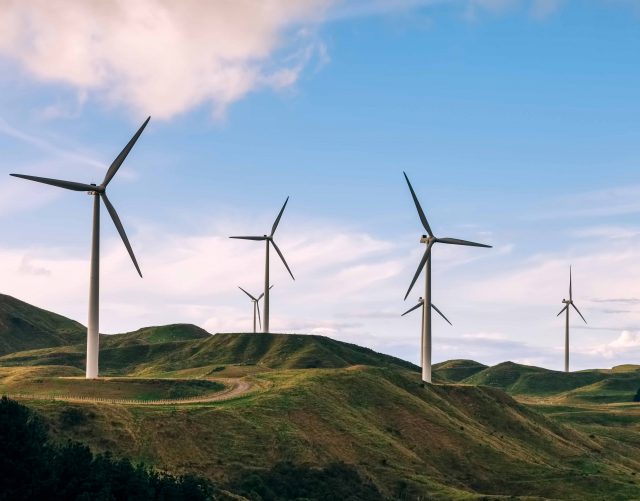 The third stage of the Tararua wind farm began operation in 2007. We again delivered on the vital trenching and cabling – confident in knowing that our previous work has proven to be long-lasting and well-made.

The turbines in stage three would have the greatest MW capacity, nearly 5 times of the turbines built in stages one and two. With the final installation, the total annual power output would reach over 560GWh.

To put that into perspective, the number of Kiwi homes that would be served from all three stages of this project would equal 74,000 – over double the homes supported from stage one and two respectively.

The project was also carbon neutral after five months of operation, overall displacing 7,000 tonnes of CO2 emissions each year. It is expected that the three stages will offset over 6,000,000 tonnes of CO2 over its lifetime – to put this into perspective, this is equal to approximately 4,615 hectares of 102-year-old totara trees.

We’ll keep the rugby fields for the traditional Saturday games – rest assured knowing, that with our help, the Tararua wind farm is reducing the environmental footprint of New Zealand as well as servicing the equivalent of Palmerston North’s occupied dwellings twice over.

Now that’s something to smile about. 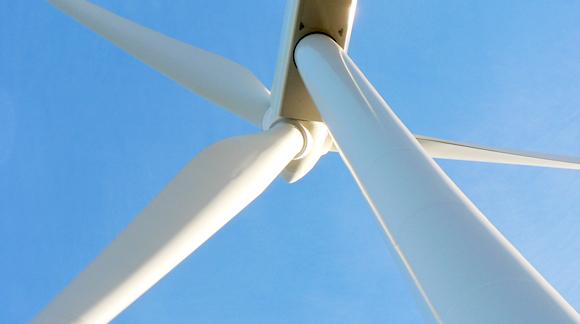 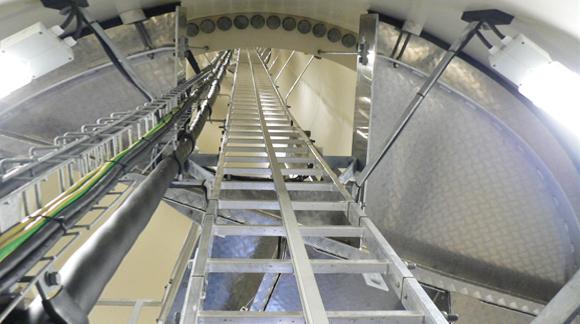 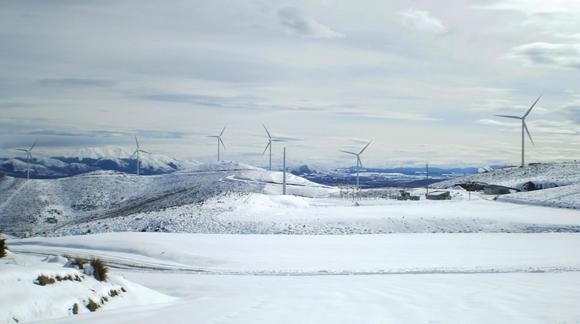 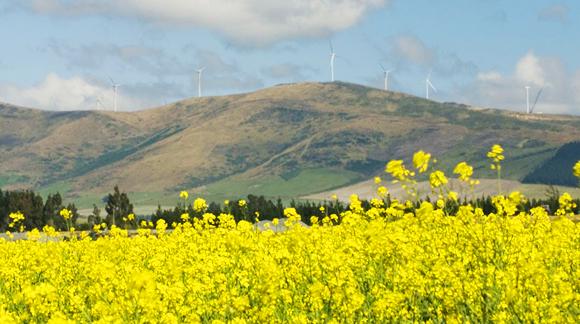 Project White Hill was an exciting project to work on due to it being the first wind farm to be built in the South Island of New Zealand. The combined wind farm capacity (58MW) generates enough electricity to power approximately 30,000 New Zealand homes annually.

The project’s location meant that environmental care was required – with certain areas being fenced off, as well as topsoil and red tussock being saved for later replanting (ref 1). As a part of the replanting, three time capsules from local Mossburn schools were planted as well, with children visiting each year to learn about environmentally sustainable energy.

This project saw the existing 14km of tracked widened, and a further 10km of wide tracks constructed for the heavy machinery that install the turbines to travel through.

Overall, we were happy to establish the first wind farm in the South Island that supplies renewable energy to power tens of thousands of homes each year. 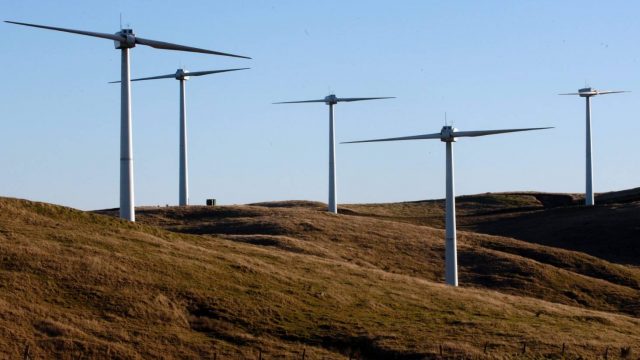 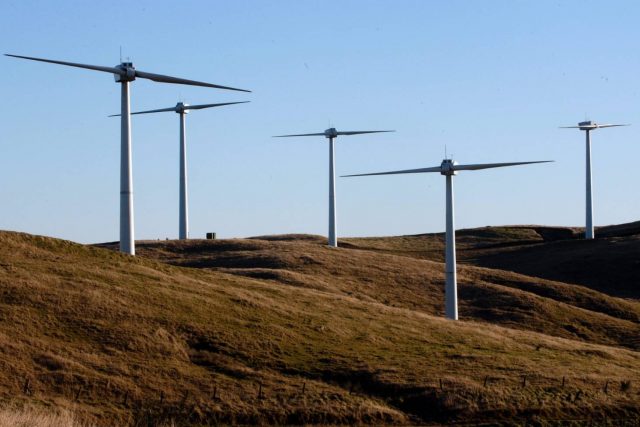 The project was broken down into stages, with the first stage consisting of the establishment of 5 turbines in 2006.

In 2010, an additional 56 turbines were consented to be established by the local city council, increasing the total number of wind turbines to 61.

An extension area was developed on the East side of the site, after research proved to indicate that the wind farms energy yield would increase from 122GW hours per year to 153GW hours per year. Due to this, 32 turbines were developed in this extension.

Currently, 97 turbines are operating onsite. We are proud to have been able to be involved in this local Manawatū project and enjoyed the challenge. 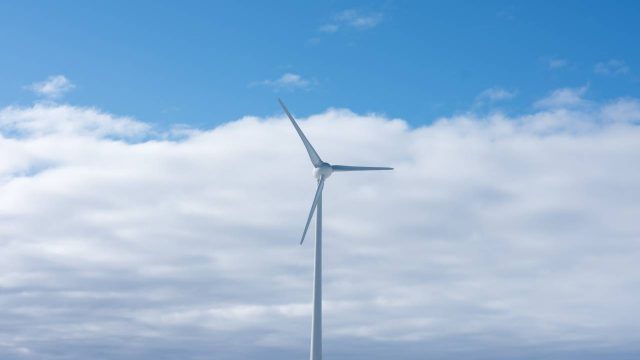 The second stage of the Tararua wind farm project was a huge success – commissioned in 2004, this brought the total number of operating turbines to 103 with a total installed capacity of 67MW.

Blackley Construction assisted the project through trenching and installing all the required cabling onsite. Combined with the Stage 1 installation, this wind farm was supplying 32,000 Kiwi homes with their daily energy requirements – we’re happy that we could help!

Even today, the project has been claimed to continue at the best possible capacity – nearly 20-years later!

The fact that the wind farm is operating as well as it was 20-years ago instils us with pride. We follow a three-part process to ensure this:

This is important as not only is it benefiting the wind farm owner and the longevity of the wind farms, but also it serves the everyday Kiwi household that relies on the energy from the wind farm.

We’re glad to have helped Kiwi homes thrive over the past 20-years and are excited to be a part of a greener move towards energy production. 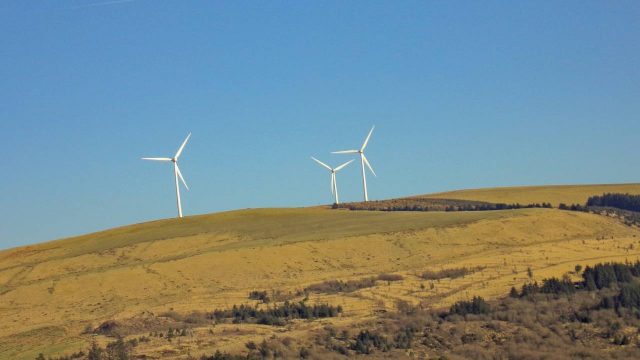 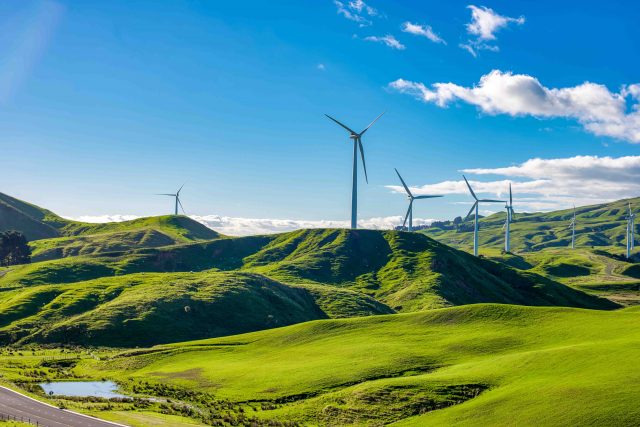 Te Apiti wind farm began construction in November 2003. It is located 10km out of Palmerston North and began generating electricity in August 2004.

Overall, the wind farm annually generates enough electricity to power 45,000 New Zealand homes. Although, the process to develop the wind farm was mighty. In February 2004, the site was flooded due to a 100-year flood – this had interfered with the project over a 6-week period.

The wind farm’s location created what’s called a ‘wind funnel’, perfectly positioned to catch the winds from the Tasman Sea, complimented by the Manawatū Gorge. Thanks to this, the turbines have a maximum speed of 17 revolutions per minute.

The site’s steep terrain made it a welcome challenge to our team – who doesn’t love a good problem to solve? 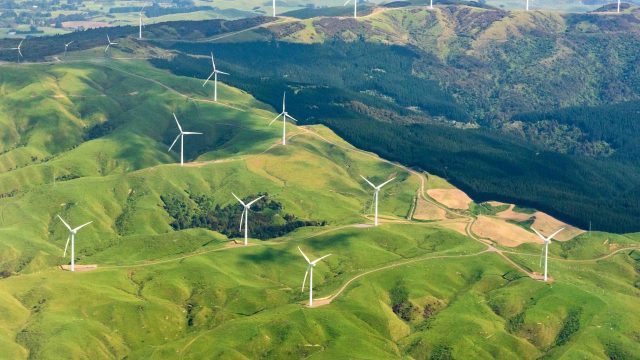 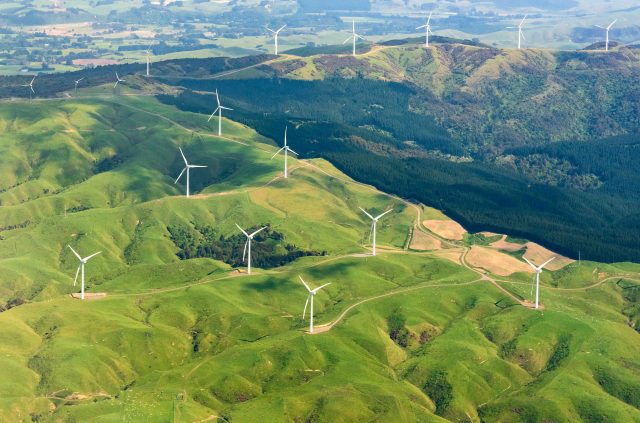 The first stage of the Tararua wind farm project was a large-scale project, and when it was completed, it was the largest wind farm in the southern hemisphere at the time. Not only that, but the site was the best performing wind farm in the world for multiple years – delivering over twice the expected electricity production. It’s expected that the first stage of the wind farm project would have supplied 16,000 Kiwi homes with their daily energy requirements – approximately half the size of Palmerston North’s occupied dwellings.

As our first wind farm project, we were excited to hit the ground running on Christmas Eve, 1999. Our role throughout the project was to trench and cable the land to ensure that everything was perfect for the installation.

The Tararua site was a great choice for the wind farm to be set up, due to the positioning of the turbines to capture most of the wind rolling through the mountainous terrain.

We are proud of the work that we put into the farm that kept Aotearoa’s lights on, heaters burning away throughout winter, as well as the clean energy that is produced from the farm.

This project was the catalyst that started our 20-year journey through wind farm trenching and cabling.